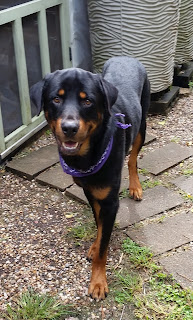 It's been almost two weeks since my best friend Bruno left us. I still miss him and I'm pretty sure I always will. But I am so thankful for Buddy! Isn't that the sweetest smile? 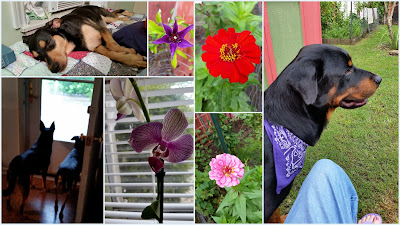 Buddy has fit into our life almost as if he'd always been here. I do love him. He and the girl dogs get along just fine. The cats are still very irate that he has invaded their space! 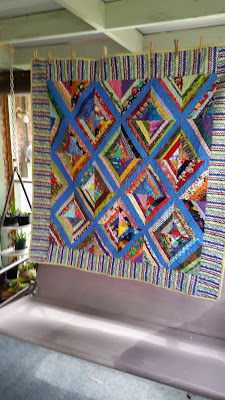 I finished a little string quilt. 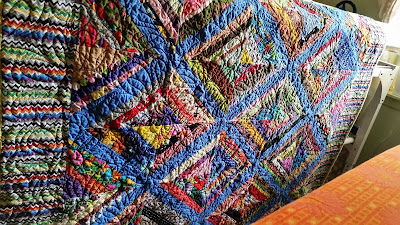 Here it is in all its crinkly cuddly-ness. 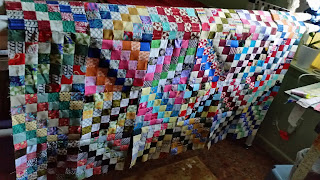 I decided the Scrappy Trips needed more blocks, so I am working on getting those sewn together. The strips all came from my 2 inch strips bins (otherwise known as ice cream buckets). 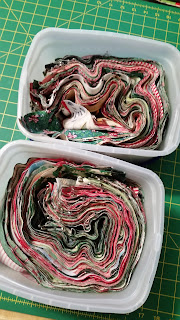 And, my friends Phyllis and Sandy and I decided that we should make a Christmas quilt in the Dancing Nine Patch pattern. I cut lots of 2 1/2 inch strips and divided them out to us all. I still have the background strips to cut, which will be white for this one. We saw a picture on facebook and wanted to make ourselves one! You know, once in a while you just have to make one for yourself.

It's hard to believe that August is almost over. Fall will be here before we know it, and I, for one, am ready for it!

I hope things are going well in your world, and that you have at least one thing that makes you very happy indeed.

Posted by Elaine/Muddling Through at 9:51 PM 4 comments: 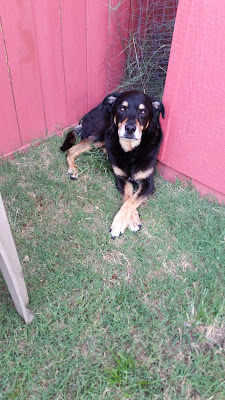 We have had a rough couple of weeks. My Bruno finished his time here. I don't think I will ever stop missing him. He was my faithful friend and constant companion. When no one else was there, Bruno was. I know that a lot of people don't understand and think we are foolish to care so much for "just an animal". They don't understand. He was so much more to me. 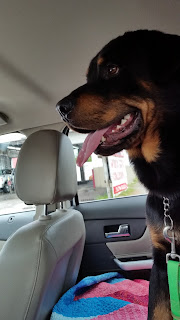 And now I'd like you to meet Buddy. I do not think it was unfeeling of me to get another dog so quickly. It's more of a testimony of what a good dog Bruno was. And this one needs me fully as much as I need him. His owners boarded him in a kennel three months ago. They had some misfortune and couldn't keep him. Eventually they told the lady running the kennel to just get rid of him. 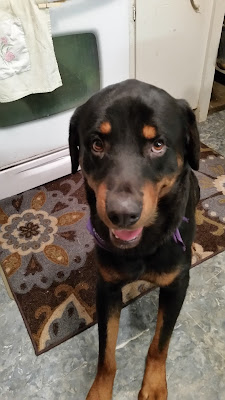 Our son is the one who found him for us. I told him I wanted a male Rottweiler puppy right now and like the good son he is, his answer was, "On it." That same day he called and gave me the info on a one year old male Rottweiler, and I called. Mr. Muddling and I went that day and saw him and he came home with us. He's not a puppy, but he is young enough to still have a lot of the puppy sweetness, and at least he's over the more destructive traits of a younger dog. 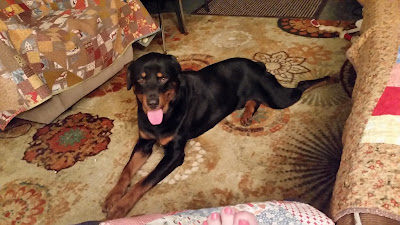 We stopped by our vet's office on the way home to get him checked. The bad news is he has heart worms. The good news is, we've already started the treatments and he has a very good chance for a long, good life.

Maybe you don't believe like I do, but I believe God is concerned even about a woman missing her dog, and even about a dog who has had a bad deal. This just seems like a "God thing" to me. We needed each other. 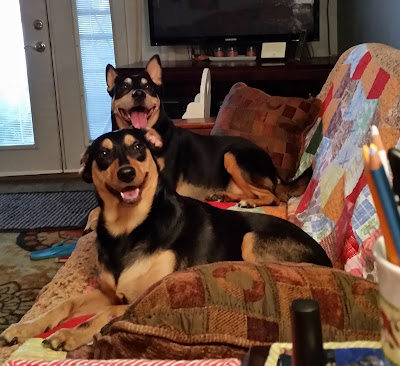 As for Lady and Ariel, they have mostly accepted him as a very big new member of the family. The cats - not so much. But they will all get used to each other with time.

I do hope you are having a good weekend and that there are things in your life for which to be thankful. There always are, even if sometimes you have to look a little harder.

Thank you for reading about my dogs and my life.

Posted by Elaine/Muddling Through at 10:30 PM 9 comments: 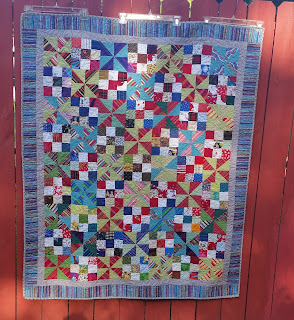 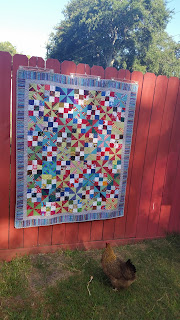 I noticed that the 2 1/2 inch square nine patches were exactly the same size - another happy surprise. So I sewed them together. I have to say, I like it! Esmeralda has inspected it and she approved, too. Got to have chicken approval, you know 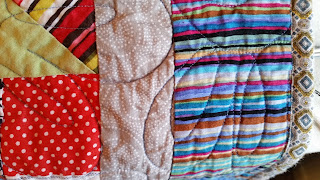 Kaffe Fassett fabrics for the inner and outer borders along with a gray print for the binding make it all play together nicely. 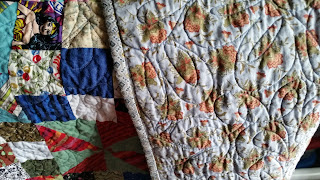 This little pale blue print (another one gifted to me by my sweet sister in law) seemed to be a good choice for the backing. 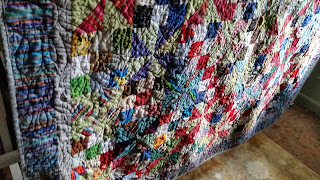 Here it is all freshly washed and dried, crinkly and cuddly. 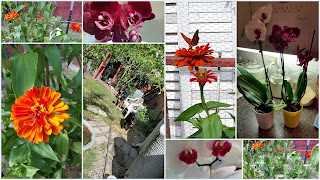 Mr. Muddling decided I needed a couple of orchid plants. Aren't they pretty! Plus a little peek at the back yard and the zinnias. Don't they just look like sunshine? The ones this year are the prettiest I've seen in a long time. 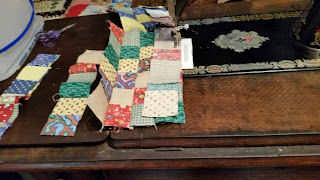 Last night I finished sewing together the last of the Scrappy Trips blocks on my treadle machine - such a sweet machine and still sews perfectly at about ninety years of age! After I get these blocks pressed, I'll put them on the design wall and see if I need to make more. Muddling, what can I say? 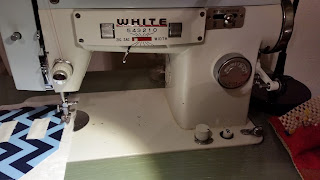 I've been working on the houses blocks, too. I cut them with the Go! Cutter and then realized I should have fused the fabric to some stabilizer first, so I cut stabilizer with the Go! too, and my friend Sandy ironed the cut outs to the stabilizer and then ironed those to the background blocks. I know. I have the best friends. Anyway, I am zig-zagging around them all with the the vintage White sewing machine I got recently.  Another workhorse, it uses a size 15 bobbin which goes a long time before running out.

It is still hot and dry here. Ah, Summer in Houston - it just goes on and on. However, I have plenty of sewing and other things to do inside, so I don't mind. I'm just thankful for air conditioning!

I hope you are having a good weekend already!

Posted by Elaine/Muddling Through at 1:40 PM 8 comments: