It's Tough Being a Supervisor

But Chloe works hard at it!  (Chloe is a "box kitty".  If there is a box, she'll be in it.  She has taken over this perch in the kitch atop both my kitchen stools, and Mr. Muddling even constructed this wooden box for her after she outgrew her cardboard box.  Oh, my, can you say "spoiled"?)

I was canning some fig preserves and she had to be sure I was doing it the right way.
I think I did okay.  LOL!  At any rate, the jar of preserves that I put in the refrigerator later sure did taste good on a piece of bread!
While the figs were processing, I finished cutting the nine patches.
Chloe had moved to another box to supervise said cutting, but had to take a nap.
I've put a lot of the squares up on the design wall, just to see how they'll look.  I still have to trim them, I just couldn't wait.  You know how it is.  This will be the back of a quilt I'm working on for a friend and work colleague of Mr. Muddling.  This man is a Vietnam Veteran and very patriotic.  He is retiring in August and we wanted to do something nice for him.


For the front, I'm going to attempt this one from Kim Brackett's book, Scrap Basket Sensations.  (Connecting Threads is having a book sale right now!)  It was really hard to make a decision, they are all so tempting.


I have the pieces all cut now, so soon.

And my sweet Bruno is just happy that he has his own (?) bed in the sewing room!
It's still terribly hot and dry here, but it IS summertime, so we just have to deal with it.  I've just come inside from doing a little more watering out there.  I'm trying to be sure that there's plenty of water for the chickens, of course, but also for the birds in the area.
I hope you're having a lot of fun where you are!
Hugs and kisses,

Posted by Elaine/Muddling Through at 6:28 PM 8 comments:

I Had Every Intention

of keeping this quilt for myself, but it turned out to be so cute that instead I personalized it for my sister in law.  I think she'll like it.
I do.  It really was not planned.  I just had a lot of leftover blocks from various quilts I've made and I wanted to use them.  I trimmed them all to 8 1/2 inches each and put them together.
The backing is a Valentine's fabric.  She is a lady who loves the hearts, so it is perfect for her.
This is a wet chicken.  YES!  We got some rain this morning.  Not a whole lot, but it was glorious!  And it has been much cooler today, just refreshing for everyone.
Except Chloe.
She really wanted to go outside.  She was not pleased that the door remained shut to her.
So she retreated to the better viewing from the bathroom window.  (I'm pretty sure I'll hear more about her displeasure later.)
Bruno goes outside all the time, so he is not terribly compassionate toward Chloe.

I do hope you're having a wonderful day.  If you haven't yet seen them, and would like a good laugh (or several) please go over the Charlotte's blog and enjoy the adventures of Mr. Pigeon.  Oh, my!

Posted by Elaine/Muddling Through at 4:35 PM 8 comments:

Labels: chickens, family, Funny Animals, in our own back yard, making things, pets, seeing something new

would just enjoy the view from inside the house where the air conditioning makes it bearable.  But then again, if I only stayed inside - it would not look the way it does out there, now would it?

Besides, if I stayed inside I'd miss all the other neat stuff going on out there.  And that would never do!
This is one of the cuttings I rooted from the rose Mr. Muddling and I dug up from the yard of a friend of ours who had to move from her house.  She had lived there for over forty years.  It was so sad.  But she wanted me to have her rose bush.  I divided it into three separate plants and gave one to my neighbor.  The other two are growing here in our yard.
This is a longer view of the same little cutting.  It's in a planter with some coleus and seems to be perfectly happy there.  It's really grown.
And....the figs are starting to ripen!!  Almost time to start canning some fig preserves.  But today, I just picked some and ate them.  They were so good.  I am the only inmate of Muddle Manor who likes figs, so I feel absolutely no guilt about eating the first ones all by myself.  Of course I did have to share with some of the chickens.  They insisted.
And, today is Miss Ru's birthday!  I cheated and bought a cake for her this year.  I don't think I've ever done that before, but Mr. Muddling said it was just too hot to bake.  I agreed.
It's a marble cake and really good.
Didn't they do a beautiful job on these sugar flowers?  I couldn't have competed with that!
I finished my "leftover" quilt top.  I do have a couple of borders added on, but did not get a picture of that before the light was gone.  I'm hoping to get the backing sewn together tonight and to get it loaded on the quilt frame.  We'll see.
Wow!  That was a lot of stuff, wasn't it?  If you're still with me - I hope you've had a lovely day in every way, and I really wish I could share some of that cake with you!
Hugs and kisses,

Posted by Elaine/Muddling Through at 9:13 PM 5 comments:

Labels: chickens, family, flowers, friends and neighbors, growing things, in our own back yard, making things 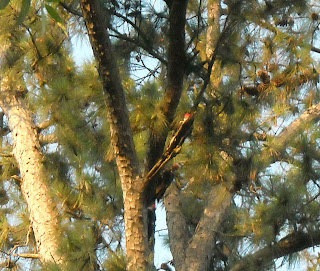 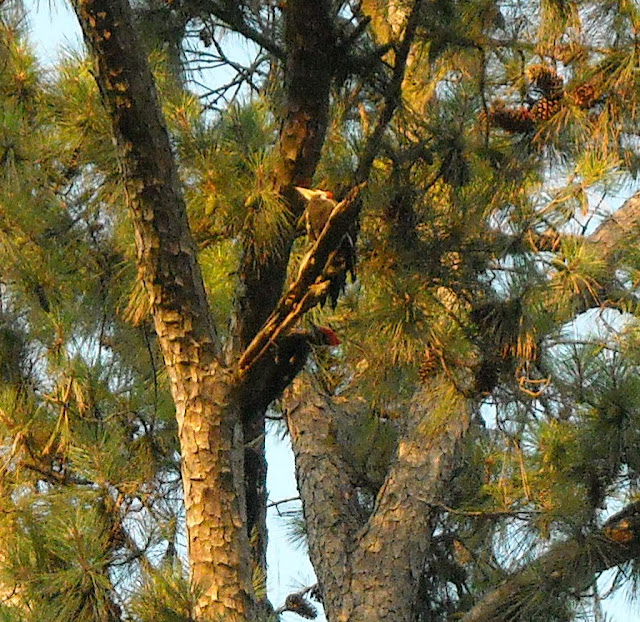 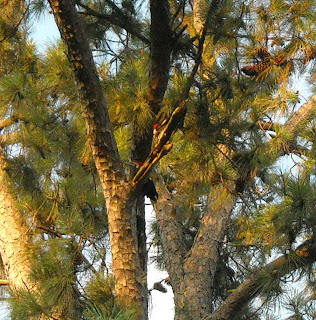 When I went out in the front this evening to water a little bit, I heard a very loud pecking sound.  Looking up into the large pine tree in the front yard I saw THREE pileated woodpeckers!  I had never seen one before.

I do apologise for the very poor quality of the photos.  They were just too far up there to get a good picture of them.  If you go to the link above you can see a better representation of how they look.  They are big birds!  Woody Woodpecker was one of my favorite cartoons when I was a child and these certainly did remind me of him.

I had to call my neighbor to come over so she could see them, too.  We think it was a couple and their child.  We really enjoyed watching them pecking away and flying from tree to tree.  It was just so exciting to me to see them.

When Mr. Muddling got home they had flown away home.  Bummer!

Hope you see something exciting, too!

Posted by Elaine/Muddling Through at 10:26 PM 5 comments: 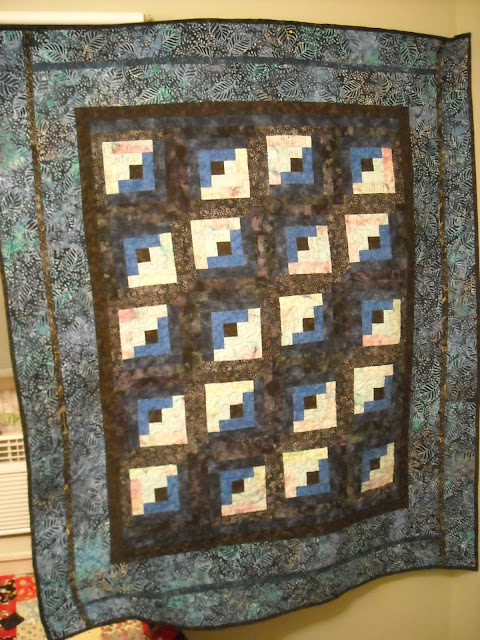 Here's the version taken inside. 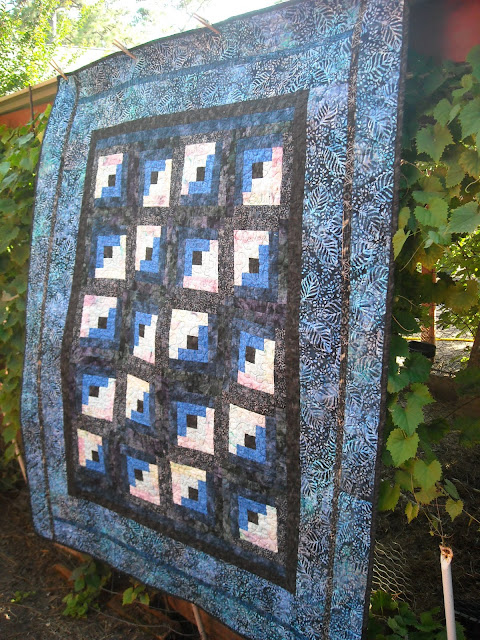 And this is the version taken outside. 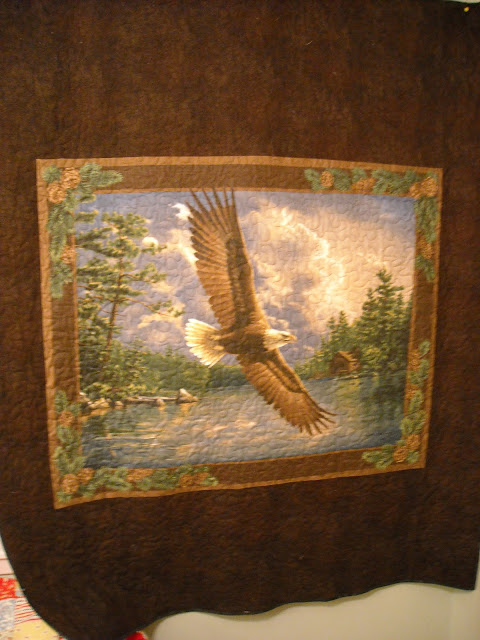 Don't you love this back?  I've had this panel for years. 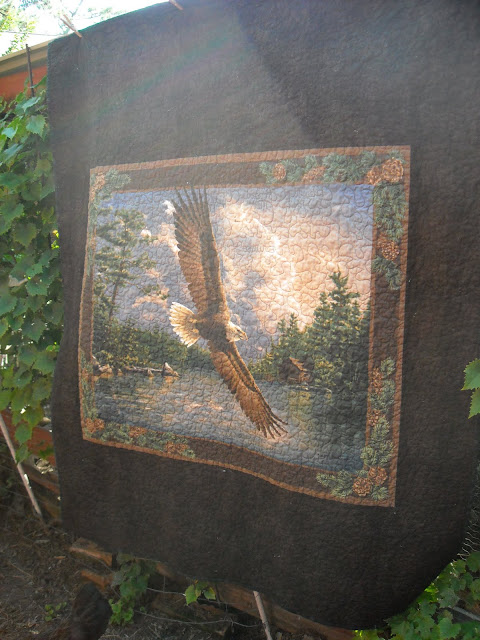 Here it is again in a picture taken outside.  And yes, that is a chicken's tail there at the bottom. 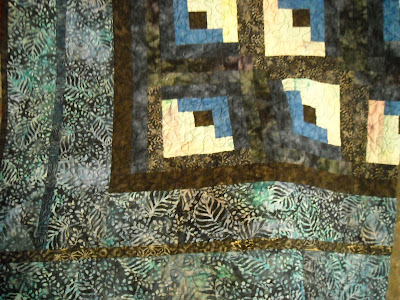 I so enjoyed making this quilt.  I made some changes to the pattern.  (Of course.)  Some intended and some not.  I decided it was not big enough and added another small and another large border top, bottom and sides.  As you can see, I had to use totally different fabrics for the small borders.  I think they work pretty well. 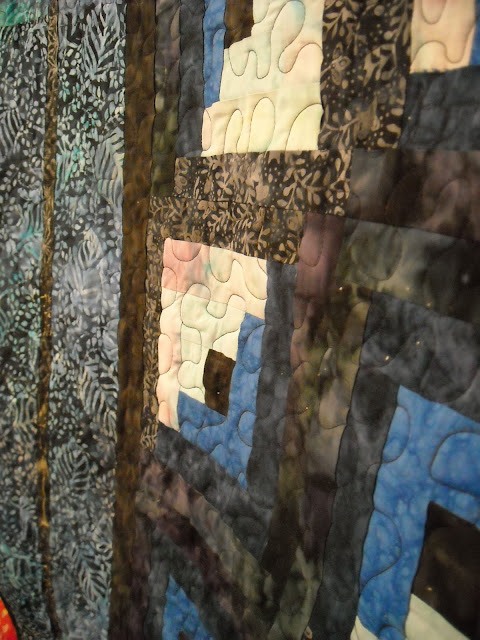 The batiks in the quilt front are just so pretty to me. 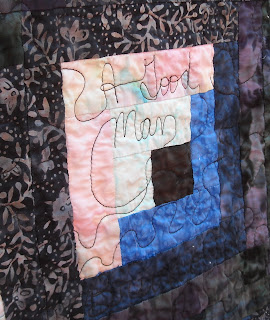 My husband truly is a good man.  I'm thankful for him, and it was a great pleasure for me to make this for him. 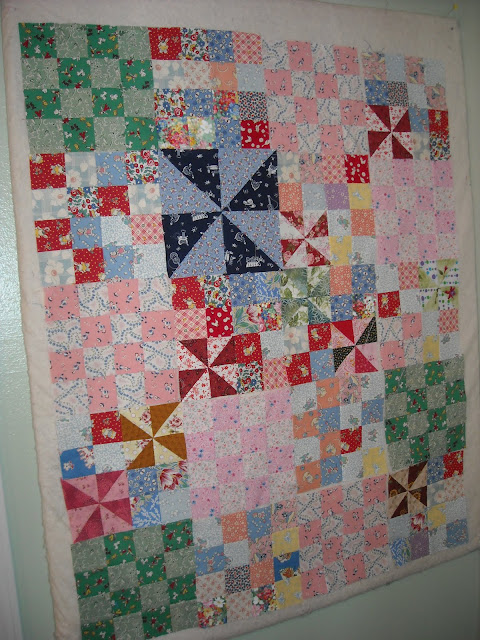 I've been playing some more with my odds and ends left over from other projects.  I'm liking how this one is coming together.  I don't like to waste.  It's exciting to me to use those blocks that got left behind in the construction of other quilts.  And I'm not the only one.  I saw that Amanda Jean is doing some of the same thing. LOL
And now, I have to share some really sad news with you.  Sunny is with us no more.  Monday afternoon I discovered that she had been badly pecked by some of her elders.  I brought her inside and cleaned her up as best I could.  Miss Ru and I fed her and talked to her and watched over her.  But along about two in the morning she quietly slipped away.  I've said many times that I'm thankful that I am a lot bigger than my chickens, because they are fierce.  I foolishly thought that Sunny's two mothers would protect her from the rest, but that didn't happen.  I've learned a lesson here, and I will not again trust a baby out there with the big girls.  I'll miss her.  She was a feisty, fearless little chick.  And cute as a button.
Treasure the things you value, my friends!
Hugs and kisses,

Posted by Elaine/Muddling Through at 7:18 PM 7 comments:

Labels: chickens, fabric, hard times, in our own back yard, making things 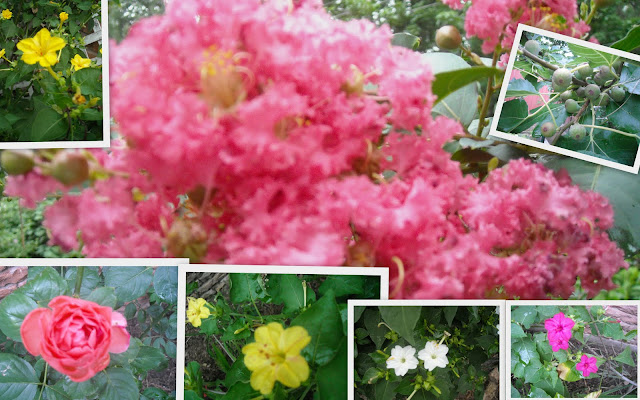 Meaning that there are lots of pretty things going on around here, and it IS hot!  LOL 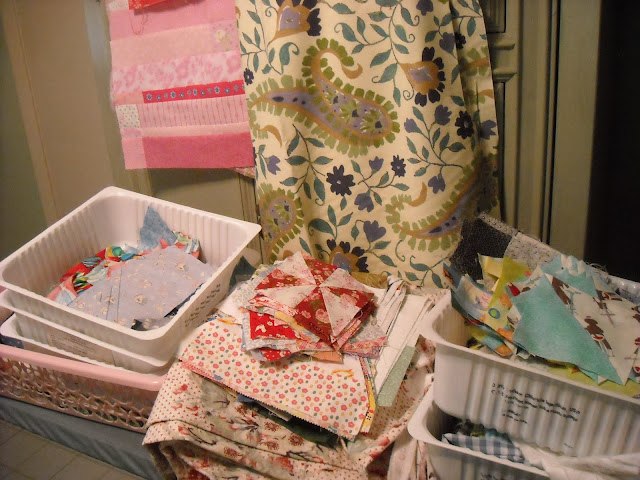 Am I the only one who has this many project leftovers hanging around?  Seriously.  It seems there are always a few blocks I didn't use or bits of fabric that are just too pretty to add to the string box. 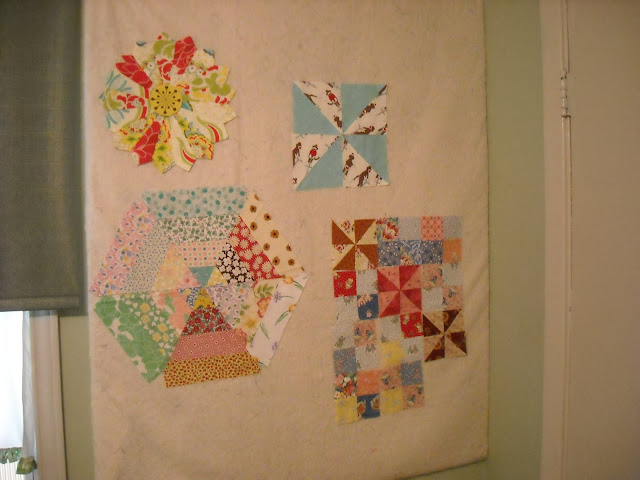 So, I pulled some of the leftovers out and put them up on the design wall.  Just playing.  You know. 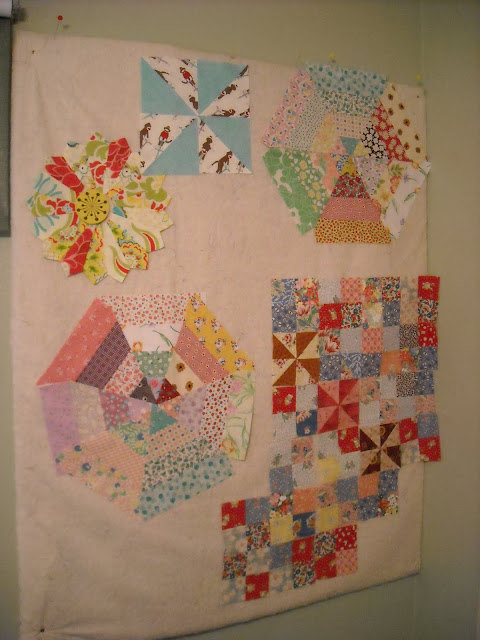 And more playing.  Some of these might actually grow into something. 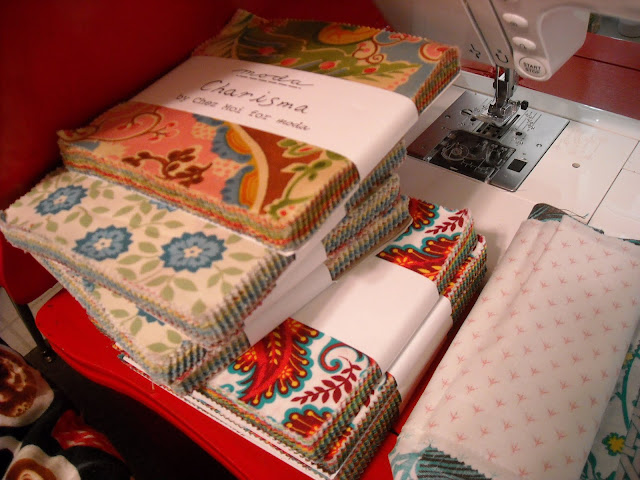 Here are some other little goodies that I had almost forgotten.  They need to grow into something, too.
And lest you think that human toddlers are the only ones that bug their mothers, take a look at Sunny.  Being a toddler.
Enjoy your day!
Hugs and kisses,

Posted by Elaine/Muddling Through at 4:54 PM 8 comments:

Labels: chickens, fabric, flowers, growing things, in our own back yard, playing around 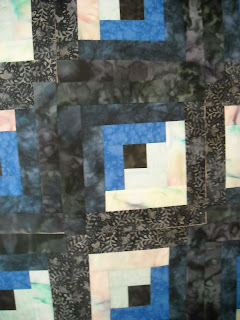 Mr. Muddling requested a new quilt.  And since he never complains about all the fabric and quilting going on around her, I am more than happy to comply.  LOL 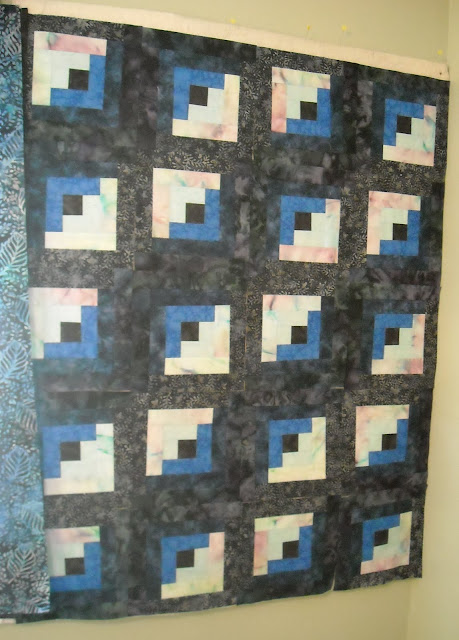 I've been doing a little on this off and on between other projects, and I got the blocks all finished last night and up on the design wall. 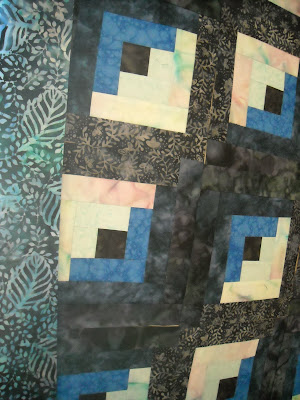 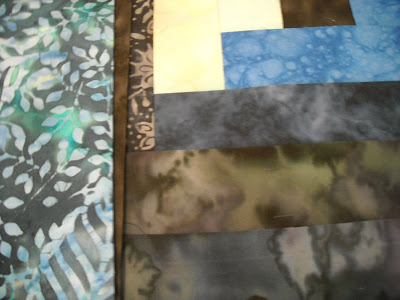 I got most of these, along with a free pattern for the quilt from Connecting Threads.  I like that their fabrics are made in this country, not imported.  And they are very nice to sew as well. 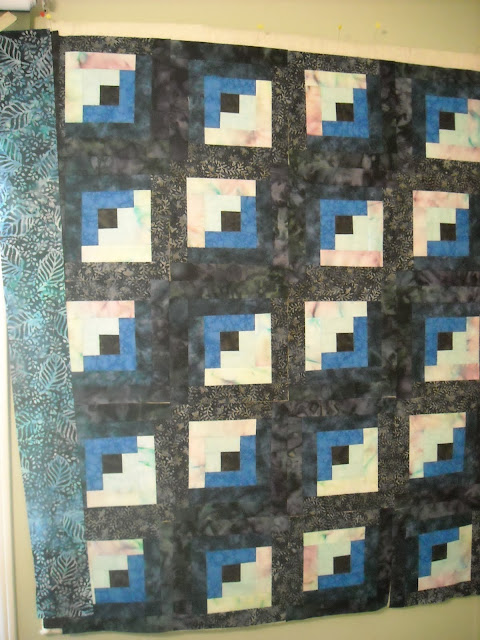 They have a really neat application on their website that lets you plug their fabrics into a quilt pattern from the site.  Saves trying to bend your brain around how things will actually look together.  Hey, anything that helps!
I have some special fabric that I'm going to include in the backing, but still muddling through how that is going to all go together.  I'll get there.  Sooner or later.
It's hot here again today, no surprise there!  Hope you're having a wonderful weekend.
Hugs and kisses,

Posted by Elaine/Muddling Through at 3:20 PM 3 comments: