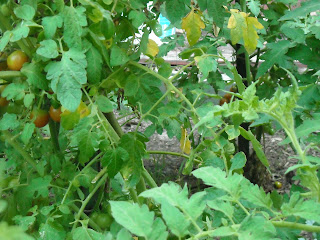 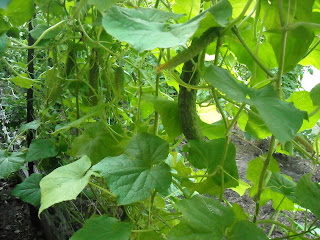 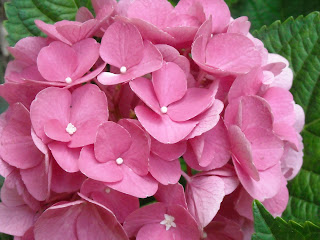 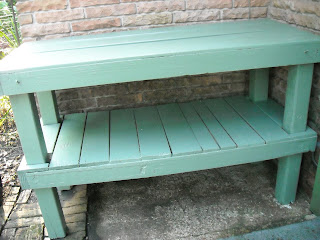 And Mr. Cutie Pie has been busy again. I had been saying (sort of complaining a little bit, maybe) that the potting bench on the patio needed to be replaced. This weekend Mr. Cutie Pie got to work and made one for me. 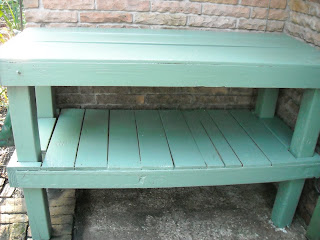 The really good part of the whole thing (other than the most excellent job he did) is that it was a "free" project. We had all the parts here already left over from other jobs. 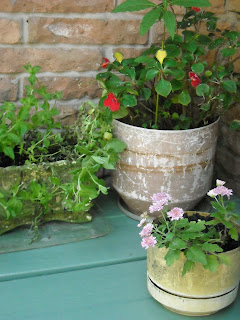 I've already started putting plants on it. One thing I really like about it is that I will have room underneath to store the buckets I use to catch rain water. 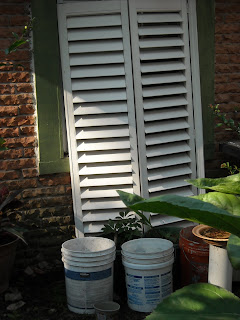 Here are some of them placed hopefully under the eaves just in case we get a shower. The plants just love rainwater, so I try to collect some for them. I have this folding shutter sort of leaning against my sewing room window. It has gotten so bright outside now that it hurts my eyes when I sit at my computer or sewing machine. 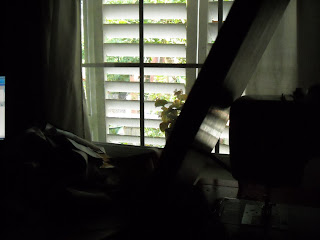 Here's the view from the inside. I do so enjoy looking out at our chickens and at everything outside my window and this allows me to continue to do that - even when the sun is bright. It's all about making do with what you have, isn't it? 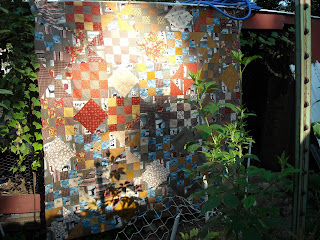 I've almost finished the quilt top I've been working on - just have to put on borders. I wanted to take pictures to show you early this morning, but as you can see, the sun was already bright. I kind of like the patterns the blackberry vines make on it with their shadows, don't you?
I hope you're having a terrific (I had to use spell check for that word, it just didn't look right) day!

Posted by Elaine/Muddling Through at 4:17 PM

Labels: family, flowers, growing things, in our own back yard, making things

Now that dang quilt is just right up my alley and I know it has my name on it. I checked. I have xray vision and on the back in magic pen it says: *karendianne. With the asterick and everything. That's how much I love it.

What a fabulous picture of your beautiful quilt. Look at the way the sunshine made a square in a square...love it. On our local news all the weather talk is about our dangerously high temps that will be here tomorrow and for the summer. But it's a dry heat, yah, like being in a brick oven. Hugs.

So glad everything is growing for you! Is it humid there? Whenever we would visit my husband's family in Houston...........it was so humid! Love the little potting bench! Blessings,Kathleen

OOPS! Me again! I forgot to tell you just how lovely that quilt looks! You always do such wonderful work. blessings,Kathleen

I sure love your quilt. It is so beautiful. It's wonderful to live in a place where everything grows so well. What a relaxing, lovely posting.

Fabulous photo of your quilt! Love the highlighting from the sun! Cool!

Well we finally caught up with the Texas heat. It's been unbelievable to go from snow to such hot weather in such a short time. My daughter was in Texas last weekend. I forget where. I'm terrible at listening to details when my kids go on and on. I have an excuse though, there are 8 of them talking at me most of the time!