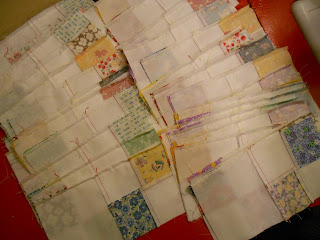 I was moving along nicely with my 1930's repro quilt when I, for some odd reason, (could it be I was tired?? in the early morning hours?) decided that I had been sewing the blocks together wrong.  So I unsewed  (ripped) them all apart and re-sewed them the way I thought they should be.  Did I look at the pattern?  No.  Did I stop and think?  No.  I just re-did all those blocks and continued making new ones the same way. 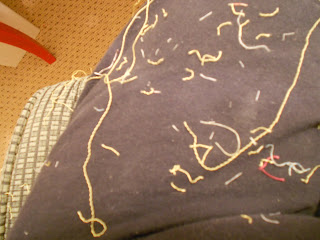 After pressing and putting them on the design wall I saw that I had made a big mistake.  Bummer.  So, rip again. 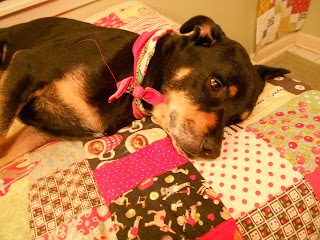 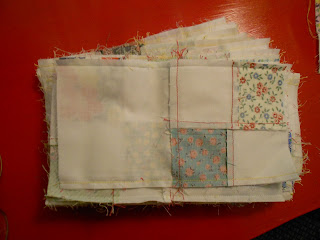 Now they are re-sewn AGAIN, and I will press and square them up.  Oh, brother!
Learn from me, my friends.  Don't get in too big a hurry!  LOL
On a really positive note, it is actually a degree or two cooler and rain is forecast for the weekend!  Glory to God!
Hope all is going well with what you're doing.
Hugs and kisses,

Posted by Elaine/Muddling Through at 1:16 PM

Oh my when that happens I sometimes meltdown. I'm glad you had Bruno there with you. Even if you didn't listen to him. He's so darn cute!!! Yeah for rain. Will the chickens like that too or do they hide away from it?

Oh dear. A friend of mine calls it reverse sewing rather than unpicking.
Now what's all this about learning from our mistakes AND reading the instructions in a pattern?? Not sure about that.
Good luck - hope it does cool down for you.