How About a Nice Chowder? 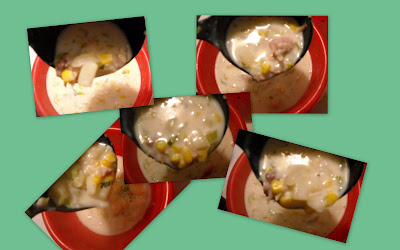 This morning was really chilly here, and I decided it would be a perfect day to try a corn chowder for lunch. I was reading about corn chowder on some blog posts over the weekend and it just sounded so good I wanted to make some.

Melt butter in large heavy saucepan. Add onion and celery and cook until tender. Stir in flour. Cook over low heat, styirring until mixture is bubbly. Stir in milk Heat to boiling, stirring constantly. Boil and stir one minute. Stir in corn, potatoes, ham, salt and pepper. Heat through. Sprinkle each serving with parsley and paprika.

This recipe started out for me in my old tried and true Betty Crocker Cookbook. The original had bacon, but since I had ham leftover from yesterday's lunch I substituted that and used butter to cook the onion and celery instead of bacon drippings.
This was really delicious! By lunch time it was not nearly so cool here, but this chowder was still mighty good. 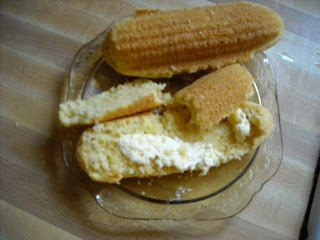 We had it with some corn sticks. 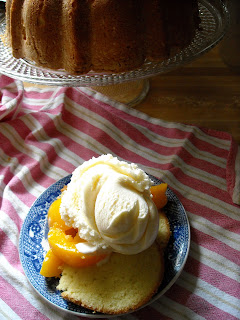 And some pound cake from my grandmother's recipe for dessert along with a scoop of ice cream and some canned peaches. 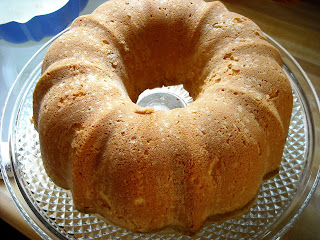 MAMA ANNE'S POUND CAKE
1 cup butter
2 cups sugar
6 eggs
2 cups all purpose flour
1/2 teaspoon vanilla extract
1/2 teaspoon almond or lemon extract
Cream butter. Add sugar gradually. Cream until light and fluffy. Add eggs, one at a time, beating well after each. Add flavoring, and then the flour. Do not over-beat after adding flour, just until blended well.
Pour batter into a tube or bundt pan which has been coated with cooking spray. Bake at 325 degrees for about an hour, or until toothpick inserted into cake comes out clean.

On Saturday morning early before the rain started, we got busy and put all the bricks back for our backyard patio. 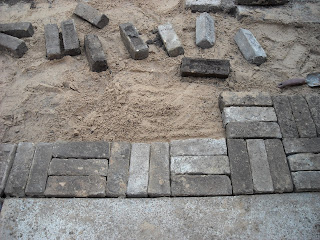 Don't they sort of remind you of a quilt? Or is that just me? 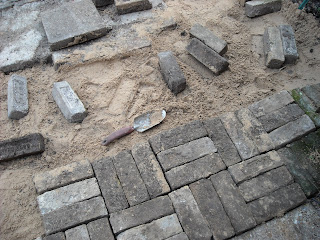 Anyway, I came in and started sewing together some nine-patches from charm packs of American Primer. 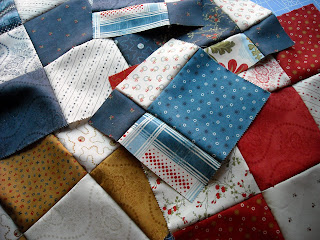 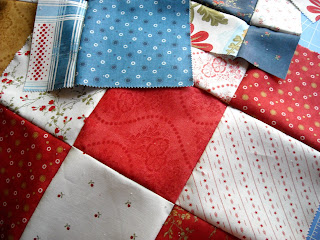 I'm going to do a disappearing nine-patch with these. 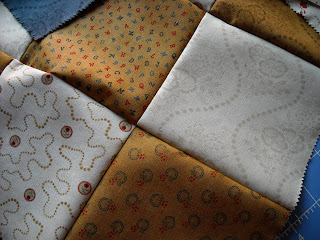 I know. I know. I have several started projects that I really should finish first, but they've just been sitting there mocking me, so I thought I'd start another one. :)
Have a great day!
Hugs and kisses,

Posted by Elaine/Muddling Through at 4:03 PM

Labels: cooking things, fabric, in our own back yard, making things

Any chowder left?! Thanks for the recipes. You guys still have a lot of work outside, maybe it's good the weather is cooler. Nice colors in the American Primer. I know what you mean about projects calling out to you.

What a great corn chowder recipe, I have to give it a try one of these days. Good luck with all the brick work. It is good to see you have time for the nine patch quilt, and the blocks are so pretty to me.

Your corn chowder recipe sound delicious! It's very cold here in PA, too. I am ready for the spring! :)
I like the bright colors in your nine patch!
Happy Sewing and good luck with your brick work!

Thanks for sharing the wonderful sounding recipes. Your quilt work looks wonderful! blessings,Kathleen

Both of the recipes, the corn chowder and the pound cake, sound great! I definitely am going to try both! I must admit, all your projects have given me a bit of inspiration to get myself going again after a bit of the winter blues.

I am definitely making this corn chowder. Thanks for the recipe.
And I love your quilt blocks. The colors are great.

Love Chowder. I usually make Seafood Chowder. I will try your recipe out. the bricks and quilts look great lol