So, I Started Another Quilt 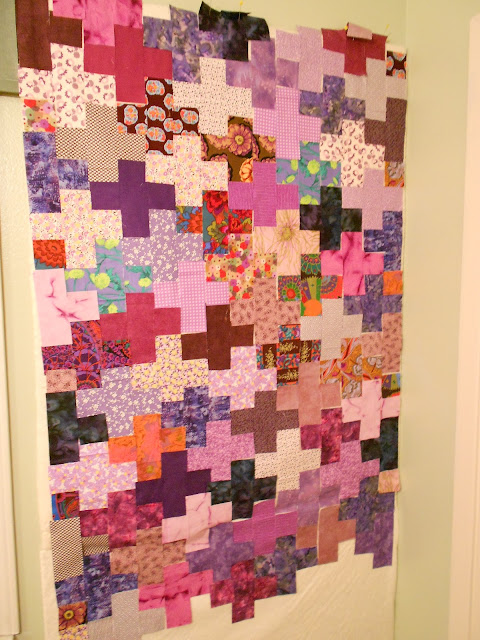 I know.  Big surprise, huh?  LOL!  I have been so inspired by Wanda's Crosses Quilts that I wanted to try my hand at it as well.  I'm trading a quilt for some cupcakes later this month, and this will be it. This is the way I started laying it out on Saturday. 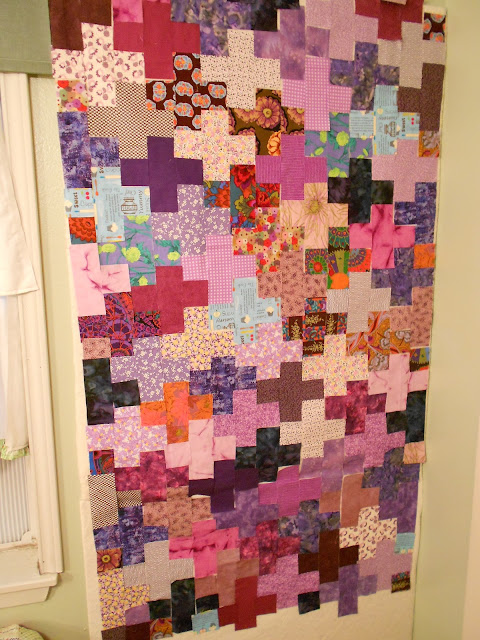 By Sunday I had made a few changes. 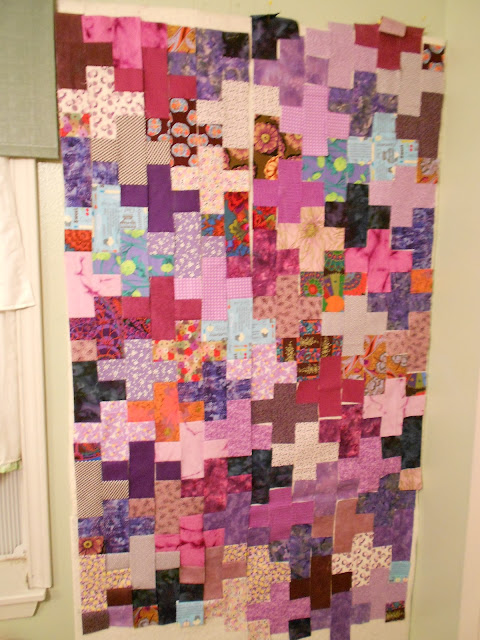 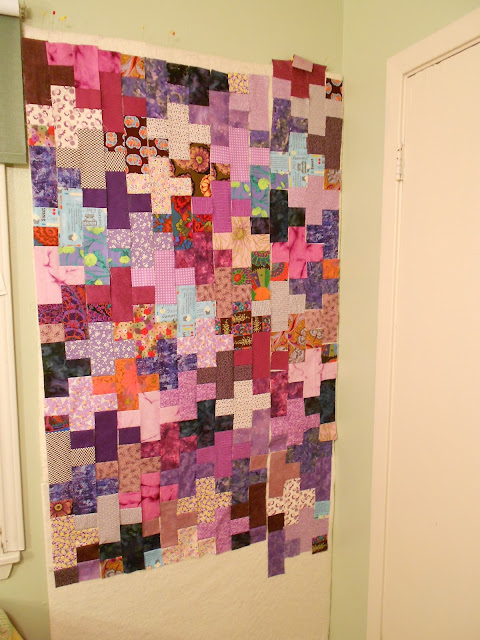 Tonight, I've got eleven vertical rows sewn.  I think I've hit the wall for tonight.
Today I took Miss Ru to the dentist for a follow up on some oral surgery she had last week.  All is well there.  But it was Sunday night that the exciting thing happened.  She and her boyfriend have been dating for a long time.  I don't even remember how many years.  Sunday night they went to a Houston Aeros (our hockey team) game.  Perry had arranged to surprise her with the proposal there at the game.  It was a total surprise to her, and he won MAJOR romantic points.  It was on camera and on the big screen.  He even went down on one knee.  Priceless! 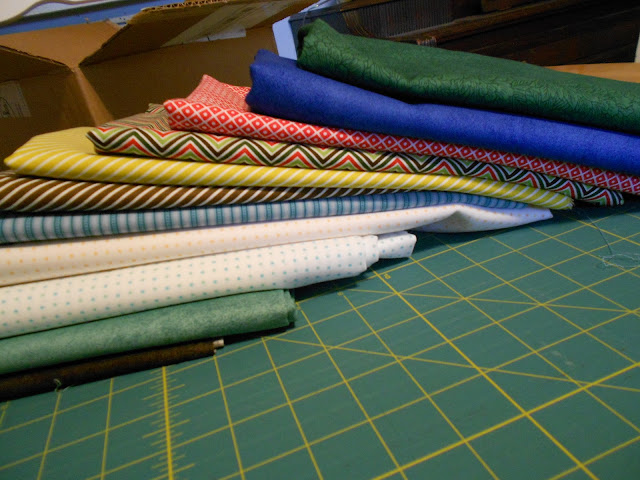 There has  been more fabric shopping going on here.  These came from Connecting Threads.  I had read on CrazyMomQuilts about her using some of the lightly dotted fabric as a background instead of white.  I like that idea.  And I have a quilt in mind that I'd like to try with one of these. 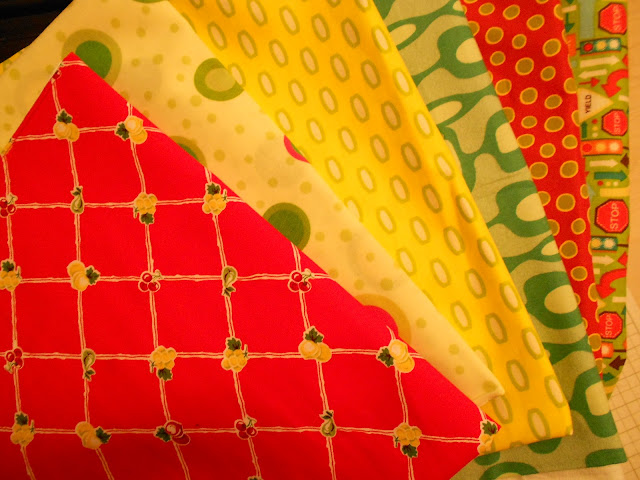 And these I got (you knew I would, didn't you?) when Quilt Taffy had that little sale.  I have no idea what I'll use these for, but I know I will.  They just sort of sing, don't they! 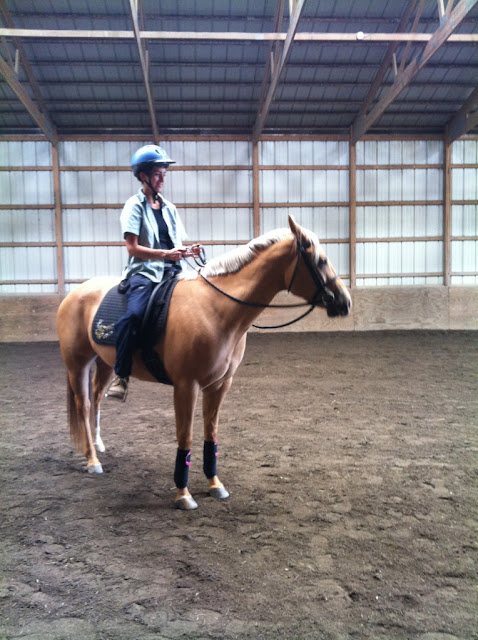 This is our baby daughter.  She's the adventurous one.  After a stint in the Army and trying lots of other things, including very responsible and well-paying positions, she's ended up on a horse farm in New York State, working with horses every day and loving it!  I laugh often at the irony of a Texas girl going to New York to work with horses, but 'tis true!  It's just a long way from home, and we miss her.
I hope you're finding lots of things to keep you busy and happy.  And that you'll tell me about them!!!
Hugs and kisses,

Posted by Elaine/Muddling Through at 1:44 AM

Lots of busy/happy going on at your place.
Quilt and fabric look great, spots are always handy.

I was getting excited about the crosses quilt and then you sneak in the bit about the proposal!!! That's better than exciting! Congratulations to the happy couple and I bet there are smiles all round in the family. That is great news.
Back to the quilt - it is looking really good. And I do like those brights you managed to buy, too.

Wow -- CONGRATULATIONS to your Miss Ru! Wedding planning in your future LOL! Love the new quilt -- I've seen this pattern popping up in several places -- it looks like lots of fun!

I love the crosses done in all shades of purple. Your final layout is great!

Have they picked a wedding date?

This quilt looks interesting and fun! Pretty fabric there you bought. Watching our kids and grands grow up and become who they are is so rewarding. :))

Congrats to your daughter (and you)! Such exciting news!

Love the quilt, haven't seen one done like this, and yes Have they set a date yet?

Thought I'd pop back over and thank you for the nice comments on mine. Don't worry about the commenting, blogger has been messed up. I'm having to sign out and sign back in and leave the box Unchecked at my Dashboard, so I can post comments.. So sorry . Hope you have a restful night and don't work to long on the quilt..Susie

How exciting for Miss Ru! Congratulations. That is so cool. Glad it was hockey and not baseball like The Rangers. You know I love my Detroit Tigers. Ouch, on tonight's game.
Love the new quilt and the colors.

That is a twist! How wonderful for her. Love the quilt. blessings,Kathleen