Chickens and a Puppy 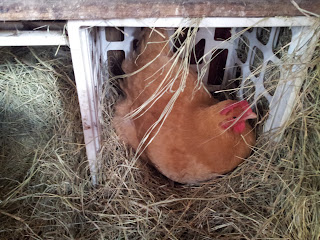 Today was house cleaning day out in the chicken house. 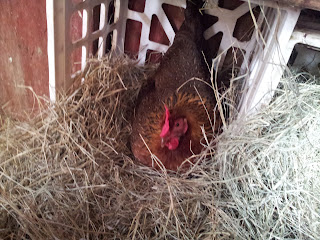 The nest boxes have all been emptied and filled with fresh clean hay. 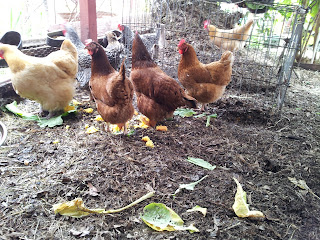 The chicken yard has been raked and there's a nice hill of compost working there in the back left corner.  The girls will work on it more in the days to come and since it's much warmer here now, it won't take long before we have some nice compost to add to the garden beds.  In this picture they are enjoying some cornbread and fresh mustard greens from the garden. 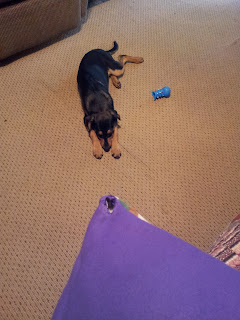 And remember the nice little dog beds I showed you just a few days ago.  Yep, that's Lady and her handiwork on Bruno's bed.
Yesterday I was out in the back yard with the dogs, and the chickens were running free having a good time.  I noticed that Lady and a chicken were fighting over who was going to eat more of the fresh egg they had cracked by the patio.  Really, I thought one of the chickens had just had an unexpected egg drop and didn't think much about it.  Until I noticed later that Lady had another egg in the same spot.  When I went to the chicken house I saw that the crafty chickens had hidden a nest under their nest boxes on the floor and Lady had found that nest and carried a couple of the eggs outside to play.  We've had a number of dogs in the almost thirty years we've lived in this house, and a lot of chickens, but this is the first time I had ever seen this!
It IS always interesting around here.  Sometimes it's more aggravating than others, but I wouldn't trade our life for anyone else's.  We each have a place that God has positioned us.  It's up to us to do our best in our own place.  I'm trying!
Hugs and kisses,

Posted by Elaine/Muddling Through at 3:44 PM

Labels: chickens, finds, Funny Animals, growing in the Lord, in our own back yard, pets, seeing something new

Lady is funny! I think I am adoring her and those puppy girl antics although I know its hard being a chicken, dog and cat mom!

That compost is so good for the garden. It's one of the great things about keeping chickens.
Looks like Lady is still looking for a bit of mischief. It's amazing what they find!

We've been through 3 beds ourselves since the addition of Ripley...Gotta love 'em or you wouldn't have them....

Oh, naughty, naughty Lady. Looks like you're going to have your hands full with this one LOL!

Dave cleaned out our coop, too. And we put the new chickens into the coop saturday. They are pretty dumb and can't put themselves in the coop at night but we are working on that.